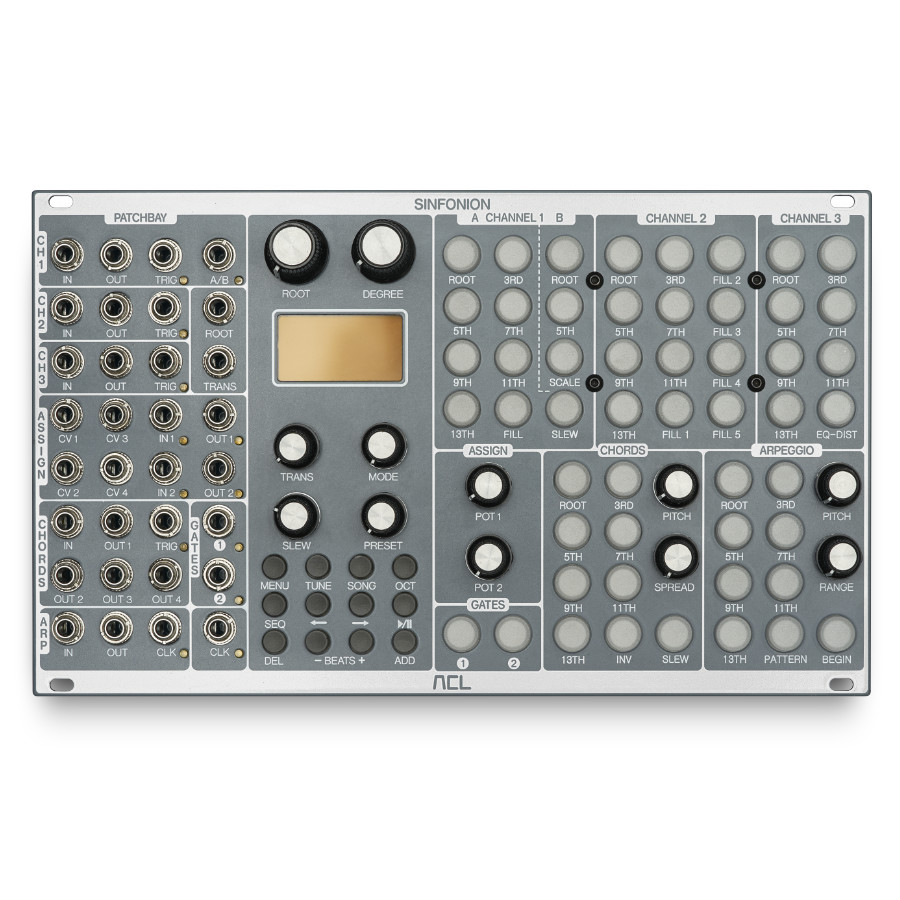 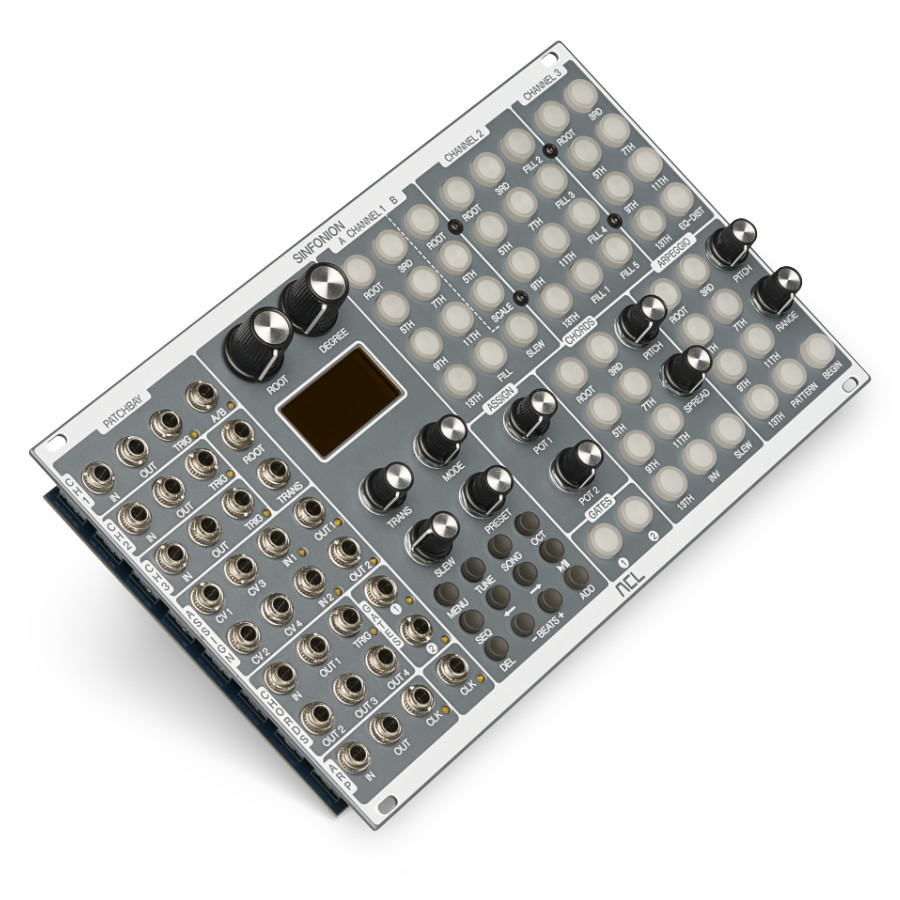 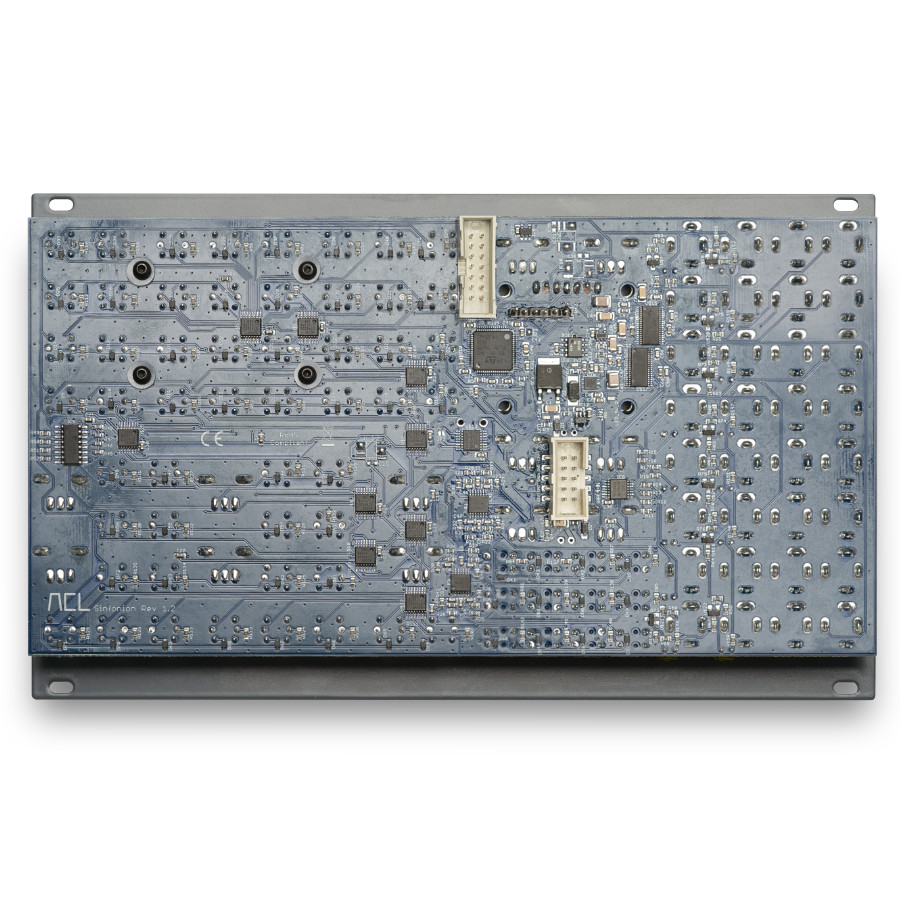 Unleash the power of your modular system with the Sinfonion!

Due to the current situation of supply problems with semiconductors, there may be longer waiting times for orders!

Sinfonion is a revolutionary product – there is literally nothing else available that lets you do what it does. It turns you into the bandleader for your modular system. Jam on the fly – creating new patterns, sequences, sounds, beats, and more – certain that all parts will play together in harmony.

Modular is addictive. One minute you′re nervously combining your first kick and mono bass modules… the next thing you know, your partner′s left and you′ve downsized to a one room to pay for kit. But that′s not the problem, of course. How can you get all these delicious oscillators and complex sequences playing together in perfect harmony?

Meet Sinfonion, a completely unique harmonizing module. It employs three quantizers (think of them as ‘snap-to-grid’ devices for pitch) for playing four note chords, arpeggios, and complex progression sequences (more on these later). All are controlled from one easily understandable interface, and all automatically in key, even when you modulate or sequence those key changes.

Now, before we explain more, we should come clean: Sinfonion is the only ACL module we didn′t design ourselves. It was designed by Mathias Kettner, who spent years designing and refining it, and we′re proud that he approached us to build it to the quality and specifications he wanted.

It′s also probably worth highlighting the obvious: to make the absolute most of Sinfonion, there′s no getting around the fact that you need a beast of a system, as at any one time it can drive eight oscillators (three melodies, four for chords, and one for arpeggio) – although things start getting interesting from three or four VCOs or more!

Now, with a total of eight pitch outputs, four gate outputs, 11 CV inputs, four trigger inputs, and gate inputs, and a large number of controls and buttons, Sinfonion can seem a little intimidating. But it′s actually simple to use. Essentially you define a key for the whole instrument, and this then forms the basis for the different sections. The key can be changed on the fly, and can even be modulated and sequenced. Now, let′s take a look at those sections…

Firstly, Sinfonion features three quantizer channels, giving direct access to harmonic scale notes via dedicated buttons (Root, 3rd, 5th, 7th, 9th, 11th, 13th) for each channel. Essentially, it pushes any incoming pitch data to the nearest note that fits the current scale – either delivered from a sequencer, from live play on a piano-style keyboard or strip, or even a more random modulator, such as an LFO.

In addition, each quantizer channel provides its own additional individual functions, such as A/B (for switching between two scale settings, using either an incoming gate signal or a combination of user-selectable criteria and incoming clock), and slew (which is like a glide/portamento for chords, complete with different curves) on channel 1, five different Fill toggles (shifting one or more notes out of the selected scale to build tension) on channel 2, and an EQ-Dist function on channel 3 (EQ-Dist means ‘equal-distance’ – this function used for smoothing out interval ranges between the resulting notes).

Next we have a chord section which supplies four pitched outputs, allowing up to four voice chords (or five, if you use it in conjunction with one of the quantizer channels). Quickly find the chord you′re looking for, or perform exciting live progressions, using dedicated knobs for pitch and spread, and buttons for selecting the notes, chord inversions, and optional slew. And as with the rest of Sinfonion, it′s fantastic for those without classical training, as it demystifies complex chord structures: you can simply push buttons, knowing that everything can remain in key.

Finally, the arpeggiator section features eight different patterns – Up, Down, Up/Down, Down/Up, Baroque, Octaves, Brownian, Random – with dedicated knobs for pitch and range (+/1 five octaves), and an array of buttons for selecting the scale notes and pattern selection.

At this point it′s worth quickly highlighting the build quality. Clearly this is a performance instrument, so all the buttons feel great, are made to last, and deliver jam-ready precision. Not only that, but the core quantiser processor (based on the STM32F446 MCU running at 180 MHz), delivers bags of processing power while delivering sub 1ms quantization for the kind of smooth glitch and jitter free operation you need for live performance.

So those are the key sections, which brings us to the brain of Sinfonion: the Chord Progression Sequencer.

The Chord Progression Sequencer is operated easily via the display. It enables the creation of 16 songs with four parts each, and 32 steps per part, with each step comprising chord voicings, octave switches and scale note selections – the status of all 52 buttons, in fact.

From a performance point of view, you can change the root, degree and mode by simply turning the decicated knobs. Moreover, all of these Steps and Parts can be triggered directly using the front panel buttons, mid-sequence, or you can manually trigger the next. You can even edit the steps on the fly.

And again, this is as ideal for musical newcomers as for music theory experts. Whatever your knowledge level, Sinfonion puts unbelievable sequencing power at your fingertips!

So that′s Sinfonion. Except not really…

And the band plays on…

When we first saw it we were blown away by all the amazing ideas it packs in, and techniques we missed at first. And since the original prototype it has evolved to include more, even some suggested by early guinea pigs (AKA ‘testers’).

For example, Sinfonion features two CV inputs and two gate inputs for controlling assignable functions and two freely assignable knobs. So you could, for example, use these to patch in an LFO to create front-panel vibrato control of all Sinfonion voices.

Then there′s the tuning mode for tuning all of your oscillators accurately (obviously pretty important when combining up to eight of them in a harmonically-synced performance.

Or how about a ‘Harmonic Shift mode’? This allows you to progressively remove notes from a chord until only the Root remains, at which point you can even play melodies… and you can modulate this to alternate between the two.

And try using an LFO as a trigger to reduce and expand the range of the octaves being played, or to modulate the Root and Transpose, all per channel.

Then there are little strokes of genius like the ability to detect an incoming glide and reproduce the glide at the output, rather than force quantizing this turning into an arpeggio (although that can be fun too!)

And there′s no reason for things to stay boringly in scale. ‘Chaotic detune’, for example, can detune all eight pitch outputs (quantisers, chord, and arpeggiator). We started by assigning it to an assignable pot, and then somebody suggested applying an envelope to control it… and the results were incredible!

Finally, as your set-up expands, Sinfonion can expand with it – Harmonic Link allows multiple Sinfonions to be connected together, to create a single super Sinfonion. (or jam with somebody else). And who knows what the future will bring? We don′t, and so each Sinfonion features an expansion port, for adding modules and expanding functionality in the future.